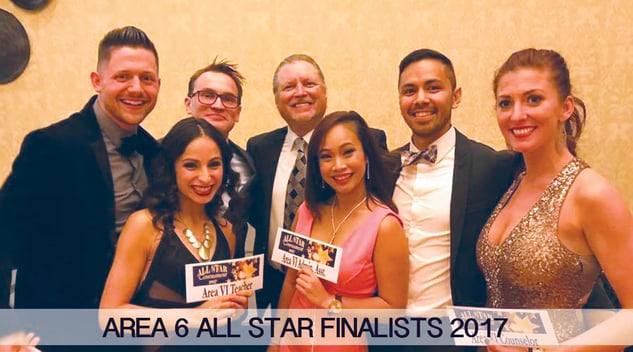 The area 6 team is assembled.  The fear is paired so perfectly with excitement, humility, and a hunger for the Championship, that you'd never know it was there.

But it is.  While there has been great success from this area in this competition, two members of the team know how quickly that success can also slip away.

For two others, they've had to watch as perennial finalists advanced on to the finals, and 2017 being their opportunity to carry the torch in their respective positions.

One rookie, coincidentally from the same Canadian studio (Port Coquitlam) that produced the top Rookie in 2016, and, finally, one lone carry over from the Championship team of 2016 that hopes to guide his new team to the same victory.

AML: How did you feel going into the Semi-Finals?  Did you do anything different to prepare?
JV: I went back up to my hotel room and rehearsed out loud to an empty room. I kept stuttering, and my voice was trembling, and I realized that I was really psyching myself out. So I did a couple jumping jacks and watched "Diners, Drive-Ins, and Dives" on the Food Network before heading downstairs for my testing time.

With the previous admins on the winning teams being Brienne and Charlotte (who were/are both admin role models I have Iooked up to, and both from our district), I've got some awesome acts to follow. It would make me so happy to know I could be as big an asset to the All Star team as they were!

Jay Bluhm returns as the only member of the Area 6 Championship team from 2016. A year ago, he was going to the finals for the first time, and now he returns as the Top Specialist with a goal to bring home another title.

JB: All Star is a fun part of Arthur Murray's continuing education that allows us to hone our communication through a different lens and it brings us together as an organization to raise our teaching standard.

AML: Who are some people that helped you get to this point?

JB: So many people helped me get to this point, but two major groups of people come to mind. I have the privilege of working with the best teachers in Arthur Murray every day at the Bellevue Arthur Murray Studio and I couldn't do it without all of them pushing me to be the best I can be on a daily basis. I also would like to thank all of the amazing students I've had the privilege of working with over the years. I wouldn't be there if it weren't for all of you! 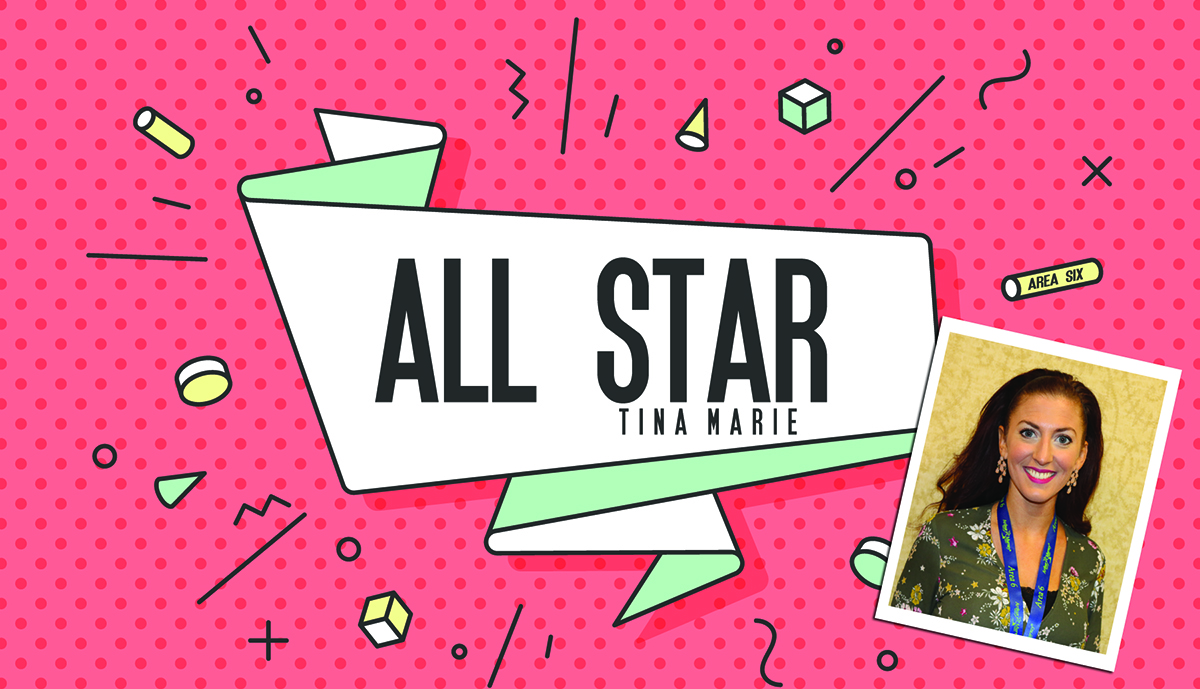 Tina Marie has watched and waited for this moment.  As a steady top 3 finisher in the semi-final round, she fits into the Counselor version "always a bridesmaid but never a bride."  Now, in 2017, she's officially hitched to the All Star Finalist title.

AML: What's your All Star backstory?
TM: The last few years I have spent making it to the district level and then getting beat out by THE JOEY SENA. Every time I felt like I did a pretty good job so I would ask him what he said in the simulations. He would sum it up for me and then I would be like, "Dang. That's good."

My goal was to beat him!

AML: Last question: what does this mean to you? What makes it special?

TM: It means that I need to work my butt off to be ready to compete in Vegas! I love a new reason to push myself farther than I've done in the past. Being a part of the Area 6 All Star team is an opportunity that I have wanted for a very long time.

I can't wait to have this new story to tell.

This is Monica's third trip to the Finals, and her third different position - first as a Rookie, then as a Specialist, and now as a Teacher.  While this is quite an accomplishment in its own right, it was a bad result that may have propelled her back to Vegas in 2017.

AML: What's your All Star Backstory?

MS: My first All Star experience started shortly after I joined the company.  I had the privilege of going to the finals as a Rookie. It was super exciting, especially being so new.

The following year I was a part of the team as a Specialist.  That was one of the toughest years for the team because we didn't make it to the top three.

The following years were a little tougher for me.  In 2016 I didn't make it past the studio round.  It was a big eye opener for me.  It helped me see the areas that I needed to improve on as a teacher.  I really took it to heart and made a conscious effort to improve it.

AML: What will it mean to you if the team wins it all this year?

MS: It would truly mean so much.  This is a very special team.  It's such a great honor to be able to bring the win to the team.  It's like winning the Super Bowl for your city.

Technically speaking, Oscar has advanced to the Finals three times.  The weird thing?  It will only be his second time competing.

AML: What's you All Star backstory?

OD: My All Star journey started bittersweet with an extreme high AND low my rookie year. I won the semi-final my first time competing, and was ecstatic; until I found out there was no spot on the team in the Finals for a rookie at the time. I had to hear about our area team winning in Vegas without me. It took a couple of years of getting close, learning from my experiences along the way, before I was able to get back to the Finals in Vegas and actually play a part our area team winning in 2015. Now I'm back again, competing in a different category, which is very exciting all over again.

AML: How did you feel going into the Semi-Finals?

OD: I was nervous, especially since this was the first time I was competing as a supervisor. I wasn't completely sure what to expect, but once it started, I felt better as it went on. 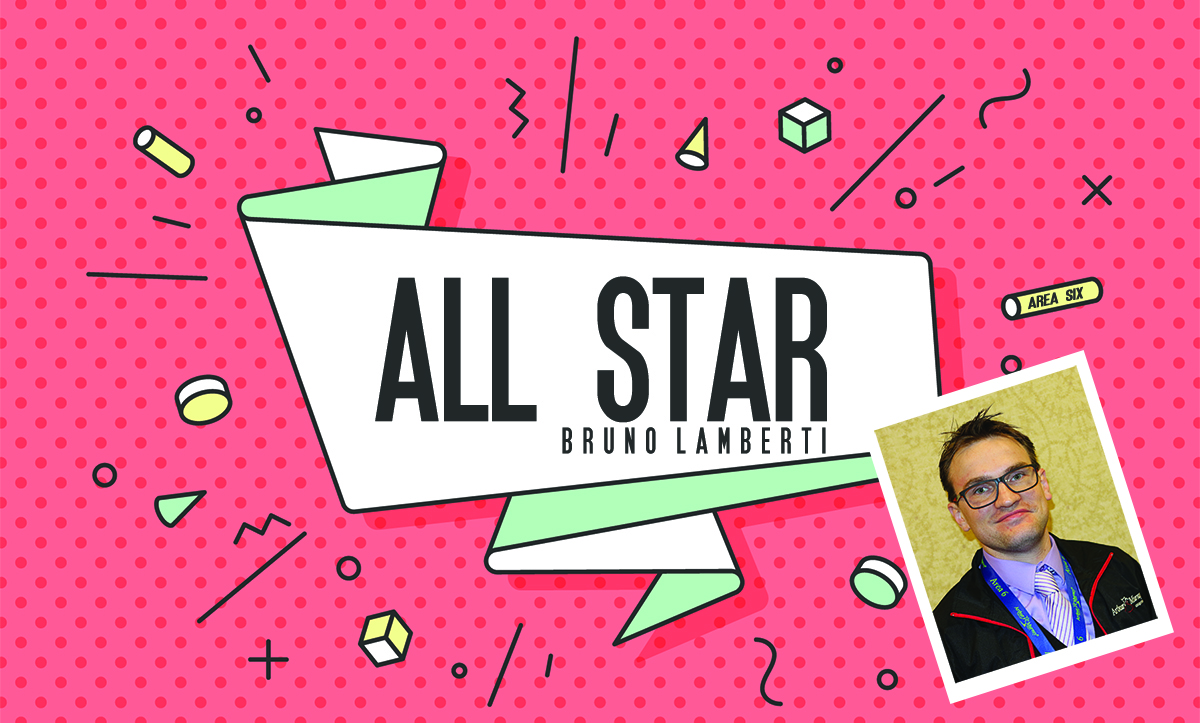 Just know this:  Arthur Murray Port Coquitlam has produced more Rookie finalists in Area 6 in the last two years than any other studio - thanks to Tim Peters, Bruno Lamberti, and their franchisees Brent Smith and Barbara Ferchuk.

Here's a little insight into the Brazilian teacher, living in Port Coquitlam, also known as "All Star Rookiesville".

AML: First off, congratulations on moving into the finals in Last Vegas. How did you react when the announcement was made?

BL:  Well, that's funny because my name was spelled so wrong I thought it was someone else. So I didn't really believe it when my team pushing me to go there.

BL: It gave us a chance to understand that Arthur Murray is not just about dance. I can see that we use dance as a way to develop as human beings. The "universe of dancing" is far deeper than just steps and turns, it's a great journey about finding your true self.

Studying and preparing myself for the challenge and attending the convention just made me more certain about this. Of course, as a professional, you need to be a good dancer and understand the methods that involve these materials, but you always need to be open to listening and feeling and going above and beyond the "box steps".

Never miss an article!  Become an Arthur Murray Live subscriber and receive all our best articles direct to your inbox.