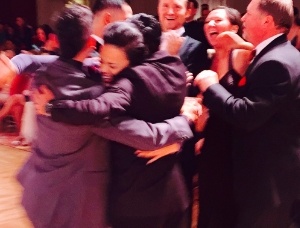 LAS VEGAS, NEVADA - After testing in their local studios, their district, area, and then finishing up at the grand finale in Las Vegas for the Championship - the All Stars from around the globe woke up bright and early to begin testing Saturday morning at 7:30am.

Two rooms, and a multitude of scenarios tested the skills of the groups from around the United States.  Unexpected lessons, cancellations, program concerns, and scheduling challenges were just a few of the snares woven into the group testing process.

After two hours, the testing was finished.  The teams cheered, and many of them hurried to change clothes for their professional dance events later that day.

The results would have to wait until the end of the night. Suspense time.

After a frustrating loss in 2014, which we covered in this story, the team from Area 6 was more motivated than ever.  In the announcement ceremony, capping off a the Professional Rhythm, Smooth, and Ballroom Championships, the results were as follows.

You Can't Forget The Most Valuable Player

Within 12 hours of the article The Return Of The Forgotten Arthur Murray All Star, the top overall performer in the All Star competition was named.  It was none other than, Oscar David.

Quite a comeback for the one time Rookie, who never had a chance to compete, until now as an Instructor, and now - the MVP.