Look Dapper in the New 20's with These 5 Dances

Considering the decade we've just started, and your current social calendar, there's a really good chance you'll have some type of Roaring 20's themed event in the not-too-distant future.

So this is definitely a sign to take your dance skills out of self-induced prohibition.

The following is a list of dances that will not only make you the talk of the pinstriped, fringe-lined event, but it'll serve as a reminder from our 20's ancestors, that sometimes, in the immortal words of the Beastie Boys, you have to fight for your right to party.

Here are 5 dances to get you started.

Whether it's Lindy Hop, Jitterbug, East Coast, West Coast, Savoy, Balboa or Hollywood Style - there's are as many types of Swing as there are flavors of ice cream.

And like ice cream, each is specifically designed to leave a smile on your face.

From a practical standpoint, the Swing will be a faithful companion dance for any wedding reception, office party, or weekend jazz festival and should see plenty of action in the New 20's. The best way to start is with East Coast Swing and then work your way into the different "flavors" of the dance.

It was 1921 when silent film star, Rudolph Valentino brought the Tango to the masses a scene from the film The Four Horsemen of the Apocalypse.

The dance became an instant sensation that doesn't seem to have lost any appeal nearly 100 years later.

While the dance is perfect for adding some passion and drama to an evening of social dancing, it's also much easier than people expect. Not to mention, a live band should have at least one Tango in their set (if they're any good). It'll clear the floor, and if you can deliver the goods, they may play an extra one for you.

Bottom Line: Your last name doesn't need to be Valentino to enjoy a tango.

The tone of the Roaring 20's of yesteryear featured equal parts fun and sophistication. Nothing is more dapper, elegant or sophisticated than the all time classic Waltz.

It's the dance version of a glass of champagne and, as a rule of thumb, if an event calls for a champagne toast - you can bet a Waltz is not far behind.

While you may not rock out to Waltz music in your car on your way to work, or wear tails or a ballgown to the grocery store, the Waltz is like a vitamin for your dance program - it delivers the most essential dance improvement nutrients to the rest of the dances you enjoy, like posture, balance, and graceful movement.

Bottom Line: There's time for elegance in any era.

The Peabody is an up-tempo, turn of the century era dance that is a big hit for the consummate social dancer. These days, it may be obscure in comparison to dances like Swing or Quickstep, but anyone who tries the Peabody instantly understands it's appeal: It's fun.

Set to tempos far beyond a comfortable Foxtrot or Swing, the Peabody is, essentially, the ballroom equivalent of a Merengue.

Patterns from both Foxtrot, Quickstep, and even Country Western can be easily grafted in, and it helps to complete the fast end of the tempo range for big band music.

Classy enough to serve as a slow dance, jazzy enough to complement a swing, the Foxtrot is the New 20's multi-tool you need to complete your kit.

This dance, referred to as the first impression dance for well over 100 years, enables the dancer to talk and dance at the same time. Which, if you really stop to think about it, is one of the most important skills to have when you know how to dance.

So, in effect, it puts the "social" in social dancing.

Bottom Line: This dance is as essential as a cool hat in a 20's gangster movie. 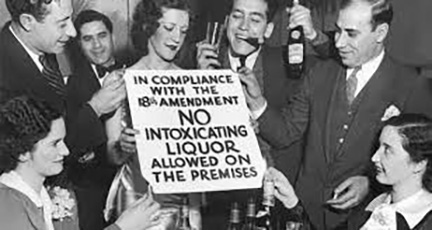 The 1920's was a decade that broke away from tradition. People celebrated life with boldness. From the clothes they wore to the jazz music they listened to, the 20's became "Roaring" because of this confident departure from the norm.

While you probably don't need a secret handshake to get your hands on a nice cocktail, we can all learn a valuable lesson from this generation of a century ago:

Get out and enjoy life!

The people of the Roaring 20's weren't just having a party because the music got better, they were enjoying life because World War 1 hand't stopped them.

These days, we can all sit back in the comforts of "the norm", distract ourselves with enough tech to get through the day, and feel too exhausted to do much else, but what would our Roaring 20's forefathers think of that?

Maybe it's time to fight back and break free from the norm - wear something fun, get on the dance floor, and move to great music. Just don't forget to raise your glass to the brothers and sisters of yesteryear who paved the way, and taught us the true meaning of the word "nightlife".