For years it was just known as "that Gap commercial". 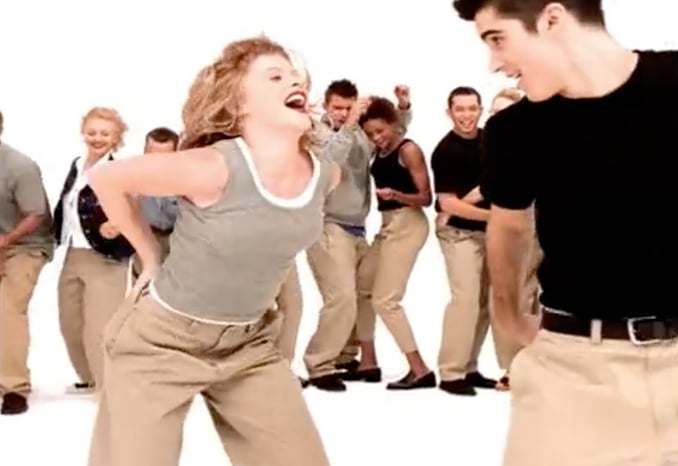 It was 18 years ago, and Gap took a calculated risk that went viral in a semi-connected world. You didn't need to describe it any further.  Khakis became synonymous with Swing dancing, and that's how a 30 second television commercial changed dancing forever.

Matthew Rolston: the Gap/Khakis Swing from Stockland Martel on Vimeo.

The hit commercial aired in 1998, but it's true origin dated back to August, 1996. Michael McCadden joined Gap as executive VP of marketing, and helped turn Khakis into a global star for the San Francisco based worldwide retailer.

Here is a clip from the original Gap press release, April 22nd 1998

"This campaign is about reinventing khakis, from the TV spots to the big walls, to the window marketing" said McCadden.

While Khakis were flying off of the shelves, another star emerged - Swing

Swing and Lindy Hop clubs were packed and those that weren't wearing khakis chose vintage inspired clothing complete with derby hats, bowling shirts, and two toned shoes.  Girls wore their hair like they had stepped right off of a WW2 era pinup magazine, and the nightclub scene of gyrating without saying hello was upstaged by social dancing.  People asked people to dance, politely, and a new era of swing, salsa, ballroom, and competitive dancers was born.

It was the dance version of the baby boom, and we all have the Gap to thank for it.

While the Gap has had it's share of changes in the corporate landscape, Swing is no longer the viral sensation it was in the late 90's.  Salsa burst upon the partner dancing scene and has been a mainstay ever since, yet although the Swing dancing crowd may have thinned, it hasn't disappeared.  Swing is one of the most versatile social dances and can adapt to a variety of types of music, to blend in, dress up or dress down.

5 Lessons from Our Bob Long Interview
By Chris Lynam